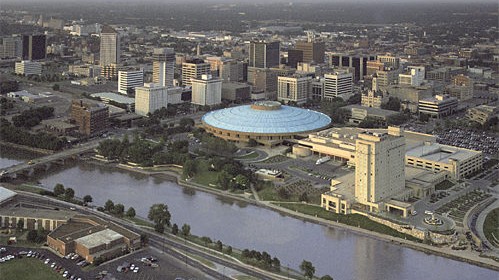 It is located on the banks of the Arkansas River and was founded in 1864 as a trading post on the site of a village of the Wichita Indians. 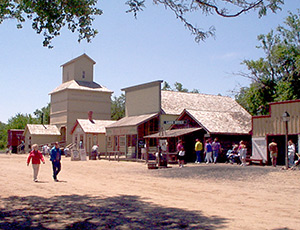 Wichita owed its early development to the Texas cattle trade along the Chisholm Trail and to the rapid spread of agricultural settlement along the Atchison, Topeka and Santa Fe Railway, then under construction. In its early years Wichita was a stopover on cattle drives to Abilene and other points as the railroad moved west; in 1872 the line reached Wichita, and the city became a major cattle-shipping center. By 1875 farmers’ fences obstructed the movement of beef herds, but grain became an important commodity.

Wichita has a history of development from its origins as a major trading post along the Chisholm Cattle Trail, to its present status as the largest city in Kansas. Along the way, the city’s residents have enlivened their hometown with a wealth of culture, unique attractions, and entertaining things to do. Wichita welcomes visitors at any season of the year.

Wichita is home to more than 330,000 people living in neighborhoods scattered over 120 square miles. Wichita encompasses some 203,000 households with a mean household income of $38,000. The population has grown steadily over the past decade with roughly 31,000 newcomers arriving since the early 1980s.

Be sure to include Wichita in your travel plans; you will enjoy the time spent in this delightful city! A visit to Wichita offers an opportunity to view outstanding museums and galleries, to enjoy the symphony or live theater, to cheer for one of the numerous sports teams, to experience a wide range of dining possibilities, and to shop in local stores. The streets are easy to navigate, and the city is fun to visit for the entire family. 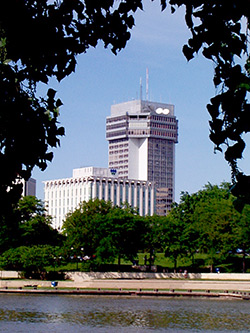 Wichita presents a history lesson in a fascinating and beautiful setting. For example, Botanica, a nature center is filled with colorful plants native to the Kansas prairie. Stroll among hundreds of beautiful butterflies enjoying their own oasis of serenity amid plants that attract and nourish many butterfly species. The Great Plains Nature Center features exhibits interpreting the animals, plants and habitats of the Great Plains of North America. Included are a 2,400 gallon aquarium, a wildlife observatory and nine interactive displays.

The Sedgwick County Zoo is Kansas’s most popular tourist attraction with nearly half a million visitors each year. Its collection of over 2,600 animals is grouped geographically, and includes the African Veldt, Asian Steppes, Jungle, South American Pampas, Australian Outback, North American Prairie.

In addition, Wichita, is home to classic, western and art museums, a remarkable symphony, classic ballet, music theatre, classic comedies and is a popular convention site. Wichita is conveniently accessible by air or interstate highways. It combines the excitement and imagination of a large metropolitan city with clean air, blue skies, friendly people and excellent food.

Save on your hotel reservations in Wichita