A Stay at Old San Juan in Puerto Rico 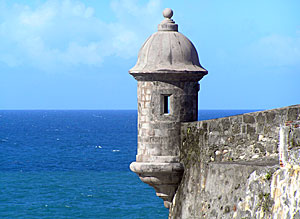 One of the most used departure ports for cruise ships in the Caribbean is San Juan in Puerto Rico. San Juan, known as ‘La Ciudad Amurallada’ (the walled city), was founded in 1521 and is the oldest city under the US flag. During the 16th century, the Spanish used it as a point of departure for expeditions to the New World.

Fortifications in the Old San Juan section of the city repulsed numerous attacks from the English and the Dutch during those years. Today, Old San Juan is a charming seven square block commercial and residential area with cobblestone streets.

The cruise ship terminal is actually located near the south side of Old San Juan so instead of booking a hotel in the beach resort area of San Juan, you might consider booking one right in the old section for close proximity to the terminal as well as the local sights. The $17 US taxi ride from San Juan’s airport to Old San Juan is about half an hour. During the ride, you’ll notice how developed the city is compared to many other cities in the Caribbean. The beach high-rise hotels along the north side of San Juan are visible from the highway. The Hotel Milano is right on Calle Fortaleza, which is one of the major commercial streets in Old San Juan. The hotel is clean and comfortable but not luxurious. Its quality is probably comparable to a Travelodge or Days Inn. A very pleasant surprise is the free continental breakfast at the hotel’s rooftop restaurant. It gives a nice view of the neighborhood from the top. 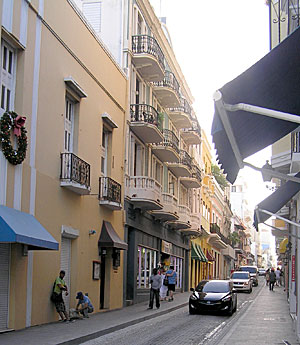 You can spend the day and evening walking the many cobblestone streets and alleys in the area. There are over 400 restored colonial buildings from the 16th and 17th century here. There were also several plaza squares and parks. One of the nicest services offered in Old San Juan is a free shuttle bus which covers two different routes through the district. Riding on the shuttle buses through both routes gives you a good overview of Old San Juan. You are able to stop off at several points of interest including the huge El Morro fort. After your visit to each attraction, you just have to wait for the next bus to come by to continue your tour. In the evening, you can easily get lost while walking since many of the streets look very similar. But with your map, you’ll eventually found your way back to the street where the Hotel Milano was. You can dine at one of the nearby restaurants for authentic Puerto Rican cuisine and not be disappointed.

When it was time to go to the cruise ship terminal, we just took a short five minute ride from our hotel. Our short stay in Old San Juan was definitely worthwhile and hassle free. A stay in Old San Juan is highly recommended for those who will be taking a Caribbean cruise with San Juan as the departure point. The only disappointment I had with San Juan was that I was hoping to do some scuba diving in the area but from the reports I read, the waters off the city are quite murky with limited marine life to see. This is likely the result of San Juan being such a busy port. The decent scuba diving sites are about 2 hours east of San Juan. So perhaps in a return trip to Puerto Rico, I will plan to make a trip to the east part of the island.