Central America is a great travel destination. With its combination of rich history and great scenic views, Central America will surely charm any traveler that visits.

Guatemala
Guatemala starts off the list of travel spots in Central America.

The Maya ruins in Tikal, Guatemala certainly helps in this country’s growing tourism. Considered as one of the world’s largest Maya ceremonial centers, the Tikal Maya ruins are the site for many excavation and archaeological discoveries that would fascinate any traveler to Central America. It has been believed to house a population of 50,000 people until it was abandoned by the Mayans for reasons no one knows sometime in the 10th century. The sites feature temple pyramids that are elaborately worked and designed. Other impessive Mayan ceremonial sites can be found in Uaxactún, Quiriguá, and Mirador. Colorful Mayan fabrics can be bought as souvenirs for their travels in Central America. 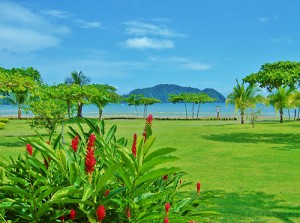 Costa Rica is another travel spot in Central America that no one should dare miss. Rich in culture, Costa Ricans frequently celebrate festivals in honor of their patron saints. This is one event that travelers to Central America should put in their must attend list. Travelers in Central America will have a lot of hiking to do as one-third of the country’s land area is covered by Forest. One of those that are open to tourists is the Braulio Carillo National Park. The Velvetworm is another point of fascination in Costa Rica and a scientific wonder that will interest travelers in Central America. Found in the country’s vast rain forests, it has the characteristics of both the joint-legged animals and the segmented worms.

Nestled in a valley 3.770 feet above sea level, surrounded by a crescent of mountain peaks, San José combines scenic beauty with an ideal climate. Temperatures stay at about 70 degrees during the day, year round, and rainfall is limited to short, refreshing showers from May to October. During the rainy season, showers fall primarily during the afternoon hours and produce pleasant breezes. This cosmopolitan capital of Costa Rica contains a smooth blend of modern skyscrapers and classic architecture. It has a more North American feel than many other Latin American capitals, with department stores, shopping malls and fast-food chains. However, it also has excellent museums, some great restaurants, colorful markets and a vibrant nightlife featuring live music, dance and two casinos.

Museums, the National Theater, and an elegant cathedral are waiting to be explored. Below the Plaza of Culture lies the impressive Gold Museum, The Plaza’s museum complex also houses a collection of contemporary art exhibits. Costa Rican cuisine is tasty rather than spicy-hot and is centered around beef, chicken and fish dishes, with rice, corn or beans and fresh fruit as supplements. From San José, day trips can be taken to two semi – active volcanoes, where roads climb to the brink of the craters. Irazú Volcano, just 35 miles from the capital, towers eight thousand feet above the Central Valley.

Ship Going Thru The Panama Canal

Panama
The Panama Canal is another noteworthy Central America travel spots. Joining the Atlantic and the Pacific oceans and connecting the Caribbean Sea with Pacific, the canal is about 82 kilometers long. A project that was started by the French but was later abandoned, the US government continued the project when it gained construction rights in 1903. It was opened for traffic on 1914 and it was only in 1999 that Panama gained sovereignty over the canal. In addition to Panama City, Panama’s largest cities are Colón, David, Santiago, Penonomé, and Chitré.

El Salvador
El Salvador has also a lot to offer the Central America traveler. One travel destination is San Salvador, its capital, which is marked with a rich culture and architectural flair. Destroyed largely by earthquakes, scenic parks, modern buildings, and plazas have now been erected in place. El Salvador is also home to the Santa Ana Volcano, which is the highest point in the country.

Honduras
Honduras, another Central America travel country, boasts of great beaches and resorts. Like Guatemala, it also has its Mayan ruins located in the northwester part. Copan, another ceremonial center of this ancient civilization is one of the greatest archaeological sites in this part of the world. People in Honduras are also quite artistic and one of the popular places that travelers in Central America should visit is the School of Fine Arts in Comayagua.

Nicaragua
Definitely not the last on the list is Nicaragua, whose popular Central America travel spot would be the Mosquito Coast. These inland areas are covered with rain forests. The area, in fact, receives the highest rain of all in the region.