For the surf enthusiast, there is no place better in the Caribbean to hit the waves than off the beaches of Rincon, Puerto Rico. Located on the westernmost tip of this island territory are nearly a dozen of the best surfing beaches to be found. From Domes Beach and Tres Palmas to Marias and Rincon Town Beach Plaza, the sportsman can expect to meet the challenge of waves that range from two to twenty five feet on any given day during the nine month surf season between September and May. 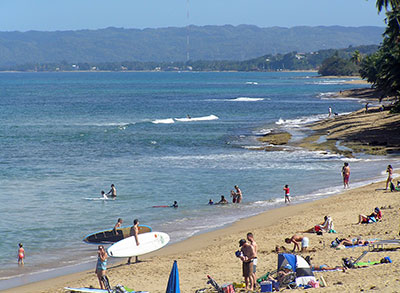 Since 1968 Rincon has played host to the World Championships at Sandy Beach. In 2007 Rincon was the site of the international Surfing Associations World Masters Competition. Besides surfing, Rincon tempts the ocean sport enthusiast with not only top quality scuba and snorkeling adventure but caps the evenings off with some of the most outstanding sunsets in the Caribbean.

For the dry land tourist, Rincon provides the spectacle of the Punta Higueras Lighthouse. This functioning lighthouse originated in the 1890’s from Spanish construction. Utilizing a rotating beacon of 26,000 candlepower brightness, this landmark offers nightly safety to the shipping lanes that pass by the coast. A tour of the local sugar cane plantations and processing facilities are both fun and a sweet education.

Rincon is home to several spectacular festivals throughout the year as well. In March the Whale Festival celebrates the migration of these ocean behemoths as they pass by on their yearly circuit of the ocean. In May, one can dance the night away to tropical beats and the island’s famous rum during the Coconut Festival. August sees the Religiously influences Feast of Santa Rosa de Lima, the patron saint of city.

Whether your interests will keep you wet from the warm ocean spray or you prefer the drier activities inland, Rincon offers the visitor many splendid ways to enjoy their visit to this tropical paradise.