Isla de Vieques lies just eight miles off the easternmost coast of the main island of Puerto Rico and measures about twenty one miles long by four wide. This small island area of Puerto Rico is the location of some of the oldest fossilized human remains in the Caribbean. Dating back around 10,000 years, it is proof that humans have inhabited “Little Girl Island” for a very long time. 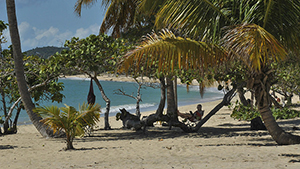 Once the European colonization began, this small part of Puerto Rico remained, for over four hundred years, primarily Spanish. It was not until its loss to the United States during the Spanish-American War that other influences began to shape its destiny. During the 1920’s and 30’s the decline in the sugar crops forced most residents to migrate to the mainland. With most of the population gone, the United States Navy took over the majority of the island and prepared it against the need of the British Navy being harbored there if Germany had succeeded in conquering Britain.

Since that necessity never arose, they turned the land into a testing range and for decades used it to test bombs, missiles and other weapons. What residents still lived on the western part of the island protested this cavalier treatment of their home and after the death of one of their local citizens by a military bomb, forced a political decision that removed the Navy from Vieques in 2003. Most of the land that comprised the military base has been converted to a wildlife sanctuary. The most intriguing feature of the island is Mosquito Bay, the largest and brightest bioluminescent bay in the world.

There are two towns on the island. While many relatively unspoiled beaches are now open to the public, continued anti-American sentiment keeps this small part of the United States territory a less than preferred tourist destination.