Your Next Vacation to Puerto Rico

The territorial island of Puerto Rico continually remains one of the crowning points of a Caribbean vacation for over five million Americans every year. The influx of around two billion dollars a year in tourism income has allowed Puerto Rico to develop a very strong tourism industry. By virtue of being a territory of the United States, visitors from the mainland are not required to have a passport as the residents of Puerto Rico are themselves United States citizens.

As well as providing many miles of tropic beachfront for the ocean loving tourist, Puerto Rico contains many unique and historical sites to visit. Culebra and Vieques islands both offer huge expanses of beach as well as Spanish castles and mansions and forested mountains to round out the scenic beauty of the land.

San Juan is the location of the Puerto Rican Museum of Art as well as Castillo San Felipe del Morro also known as Fort San Felipe del Morro or Morro Castle, a 16th-century citadel.  The fortification, also referred to as el Morro or ‘the promontory,’ was designed to guard the entrance to the San Juan Bay, and defend the Spanish colonial port city of San Juan from seaborne enemies.

Located next to el Morro is Santa Maria Magdalena de Pazzis, one of the most beautiful cemeteries in the world. 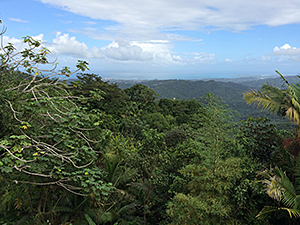 Because Puerto Rico is south of the Tropic of Cancer, it has a tropical climate. There is no distinct wet or dry season in El Yunque; it rains year round. The temperature and length of daylight remain fairly constant throughout the year. The average temperature year-round is 80 degrees Fahrenheit (high) and 70 degrees Fahrenheit (low). All of these factors provide a year-round growing season. 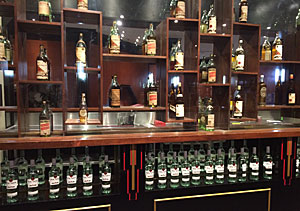 Bacardi Corporation was established in San Juan, Puerto Rico, in 1936. The current facility was built on 1958 in 127-acres in the town of Cataño. Baptized as “The Cathedral of Rum” by then Governors Luis Muñoz Marín, the facility is the largest premium rum distillery in the world.

Since 1961, Bacardí Corporation has operated the state-of-the-art Casa Bacardí Visitor Center, the second most visited venue in Puerto Rico.

Possibly one of the biggest scientific attractions on this huge island paradise is the Arecibo Radio Observatory which played such a huge role in the S.E.T.I. (Search for Extraterrestrial Intelligence) Project that it is still a focal point for Hollywood movies and television shows.

Mayaguez is home to the only public zoo in the island. The zoos 2 main animal selections are the African Forest and the African Savannah. Also it features a Beautiful bird sanctuary.

Whatever you find in Puerto Rico to entertain you, it prides itself in being one of the best tropical paradise vacations to be found. While close to home it still offers that world away flavor of the exotic.