Explore the Black Forest in Germany

Southwest Germany is a region of outstanding beauty with numerous forests, lakes and waterfalls. Tourism is the chief industry in the Black Forest in Baden-Wurttemberg on the edge of the Rhine river. The wooded, mountainous area has several tall peaks, the tallest of which is the Feldberg, standing at 1,493m. The trees are mainly pines and firs, some of which are grown on a commercial scale. Unfortunately, the forest has been depleted due to mass logging and the effects of acid rain. The Lothar Cyclone in 1999 also did its share of damage, destroying acres of trees on the tops of mountains.

Five rivers, including the River Danube and its source, run through the Black Forest. There are paths to cater for hikers, mountain bikers and cross country skiers. The area is a haven for wildlife, including owls and eagles. Other more unusual animals are to be found due to commercial enterprise. Visitors can ride a camel at Rotfelden and ostriches are reared on a farm at St. Peter.

There is a tradition of regional cuisine in the area and some food items have become internationally famous. Black Forest Gateaux is still on the menus around the world. The original chocolate cake recipe is still adhered to in the land of its birth with ingredients including whipped cream, cherries and liqueur. Black Forest Ham is also popular at home and abroad. The smoked ham is seasoned with pepper, juniper berries, coriander, garlic and other spices.

Culture and history are celebrated in the region. This can be seen at the open air museum named Vogtsbauernhofe. It re-creates the life of 16th and 17th century farmers with replica farms. There is a long history of making timepieces in Germany and the German Clock Museum at Furtwangen traces the history of clock making and watch making. The collection includes cuckoo clocks, musical clockworks and mechanical musical instruments. 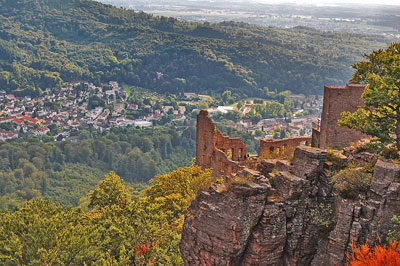 One of the most popular towns in the Black Forest is Baden-Baden. The 83m telecommunications tower, known as the Fremersberg Tower dominates the skyline. The view can be taken from the observation deck and there is an adjacent restaurant. The town contains the Festspielhaus, which is the largest opera house and concert hall in Germany. Major opera and ballet productions are staged there. The town has a fascinating history, as can be seen at the ruins of the Roman Baths and the Hohenbaden castle ruins dating back to 1102.