You will certainly not be bored when you travel to France. Considered one of the most romantic countries in the world, France remains one of the ultimate travel destinations in the world, especially for people who love sightseeing.

Paris is the most visited city in the world, with more than 30 million visitors per year.

Metropolitan France possesses a wide variety of landscapes, from coastal plains in the north and west to mountain ranges in the south-east (the Alps) and the south-west (the Pyrenees). The highest point in western Europe is situated in the French Alps: Mont Blanc at 4,810 metres (15,781 ft) above sea-level. There are several other elevated regions such as the Massif Central, the Jura, the Vosges, and the Ardennes which are quite rocky and forested. France also has extensive river systems such as the Loire, the Rhône, the Garonne and the Seine.

There are a lot of places to travel to in France. Paris is the capital city of France situated on the banks of the river Seine in north-central France and is home to the world-famous Louvre, which houses some of the most celebrated works of art in the world. Travel back to the time of such great artists like Leonardo Da Vinci. See for yourself the Mona Lisa, Venus de Milo and the ancient Winged Victory. The Louvre is the largest and the most famous museum in the world, boasting an art and artifact collection that would make any traveler to France gasp in awe. Other museums that people who travel to France should look into are the Pompidou, the Musee Rodin and the Musee d’Orsay. 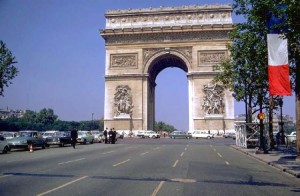 Another sight worth seeing when you travel to France is the Avenue des Champs-Elysees, which was built in the 17th century. Champs-Élysées is a garden-promenade turned avenue connecting the Concorde and Arc de Triomphe. It is one of the many tourist attractions and a major shopping street of Paris. This avenue has been called “la plus belle avenue du monde” (“the most beautiful avenue in the world”). Restaurants and boutiques can also be found along the stretch.

One’s travel to France will not be complete without visiting The Notre Dame Cathedral in Paris. A model for French Gothic Cathedrals in the Middle Ages, the structure still stands proud, rich in history and architecture. With its large glass surface area supported by carved stone tracery, the Notre Dame de Paris remains to be one of the greatest works produced in that era.

Children who travel to France will find the Disneyland Paris a great place to hang out. The 5000 acre resort is in itself a wonderland filled with the most exciting rides and games. Disneyland Paris in fact is one of Europe’s biggest tourist attraction. 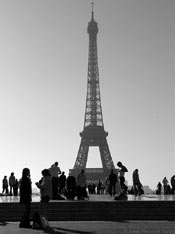 Of course, you must see the beautiful and famous Eiffel Tower. You would not dare leave France without seeing this wrought iron landmark made by French engineer Alexandre Gustave Eiffel for the 1889 Paris World’s Fair. It is the tallest structure in Paris and among the most recognized symbols in the world. The tower stands 300 m (1000 ft) high, which is about 75 stories.

People who would love to travel in style will probably shop until they drop in some of France’s fashion squares. The Quartier Latin stretch and the St. Germain des Pres offer a wide variety of shops, from booksellers to antique shops to boutiques. The Printemps and Galeries Lafayette will also be a shopping haven for people traveling to France.

There are also great restaurants inside the QL. Try Parisian pizza, the Lebanese Mezze or just a plain croissant. Visit the bars and party on with the locals. The La Java, for instance, features live Latin bands that will entertain anyone who travels to France. The Moulin Rouge, thanks to the movie, has also attracted quite a number of following.