Skiing in Kopaonik, Serbia is becoming a growing trend for skiers looking to move away from the commercial skiing facilities of Central and Northern Europe in search of more naturally occurring skiing trails.

With a snow range of 1770-2017 metres and a village positioned 5,000 feet above sea level Kopeonik in Serbia is seen as the answer to many skiers’ dreams. With a three hour journey from the nearest airport Kopaonik is surely worth the effort, having cross-country skiing, night skiing, skydiving, sleigh rides, ice-skating, indoor tennis and many other activities for the winter sports enthusiast to enjoy.

The mountain climbs 35,000 feet into the cold Serbian sky, whilst ski lifts only climb to 6,617 feet. The skiing facility is yet to host a major skiing event; despite being home to several international snowboarding competitions and cross-country skiing as well. The living quarters are apt for pricing that would delight the weariest of tourists.

Skiers can experience national cuisine such as Burek (pastry, cheese, spinach) and Pljeskavica (grilled mince) for well under $10 a meal. The old favorites such as burger, chips and pizza are still on the menu, and the price of $1.50 a beer might delight some holiday makers looking to do slightly more than just ski! The living area can handle over 5,000 tourists at the same time, whilst the bars and clubs around the area make the holiday destination more suited to the younger holiday-maker. Another issue that is quite prominent is the mistake that many make in traveling to Kopaonik to celebrate Christmas – the celebrations are of slight comparison to western culture, despite its labeling as a winter heaven.

With different piste types Kopaonik caters for beginners, intermediates and experts with the following ratio. 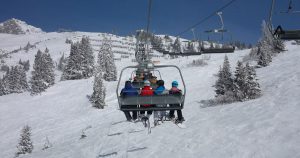 Having 21 lifts and an uphill capacity of 15,000 (an hour) Kopaonik is more than capable of catering for its millions of visitors each year. With slopes facing N, N/E and N/W you can be sure to experience the densely populated villages that surround the region. Thriving from the tourism the mountain provides, Kopaonik has recently became home to a 4 star luxury hotel providing entertainment and accommodation to skiers and executives alike.

With the longest run covering 3.5 KM and expert tuition on hand, Kopaonik has recently benefited from its appointment of English speaking instructors across skiing and snowboarding disciplines. The advanced runs down the Kopaonik mountain-face are a primary incentive for many skiers to choose Kopaonik as their skiing holiday destination. The 6 runs that fit into this category must be epitomized by the Konaci – which a local holiday village was recently named after.

The Konaci has an angle of 79 degrees at a certain point, which it is said that – if you go too slow, and fail to position yourself correctly, it would be perfectly feasible to fall forwards merely traveling in a straight line. The Konaci sees skiers traveling at speeds of over 50 MPH and jumps that allow airtime of over 8 seconds. The Konaci is praised and feared by the top skiers from Europe and further a field. Despite this, the run featured in the 2005 snowboarding event that took place in the Kopaonik mountains.

With snow falling on the slopes between August/September all the way through to early March, skiers should plan their trip with that in mind. The slopes of Serbia and the warm generous nation make Kopaonik an ideal holiday destination for any traveler looking to have a good time on a set of skis. The package deals start from around $400 a week, whilst amazing savings can be made through booking online.