If you are considering a vacation in New York, planning ahead is the only way to go. There are simply so many things to see and do that you must have at least a general idea of how you want to spend your days before you can even begin to get started. New York is one of the greatest cities in the world, it didn’t get that way without a reason and it has a long history that is part of its greatness.

If I were to choose how to spend my time in New York and what wonderful things about New York City to introduce my children to, I would choose to introduce them to those things that bore the most historical significance first in order for that to really sink in and not be competing with the Nintendo Store or the really cool keyboard at FAO Schwarz. I would want my children to understand the history of our country good and bad and I want them to someday instill in their own children the importance of that history.

By visiting the national parks first, I will have enjoyed the benefits of the price tag (free is good almost anyway you slice it, particularly when you and your children are getting an education) in addition to fresh minds on which to impart this crucial knowledge about the birth of our democracy. Ellis Island is a great place to visit, but I think I will show them the statue from afar rather than taking the ferry ride out there. There is just so much to do in New York and every second counts. I want them to have a wonderful time as much as I want them to gain some wonderful insights that they can share with their friends at school as well (something other than the latest and greatest new Game Cube game that is coming out soon). 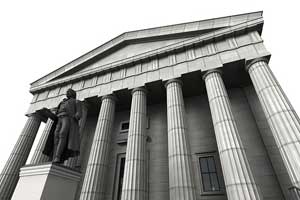 Some of the important national parks I’d like to take my children include: Federal Hall, where Washington was inaugurated, Grant’s Tomb, Theodore Roosevelt’s Birthplace, and Castle Clinton, which was designed in order to keep invaders out. I would also like to take them to Saint Paul’s Church. Not for religious reasons but for Religious freedom issues. I think there is an important lesson to be learned here even today, perhaps especially today.

I think the lessons that can be learned about the history of our nation in New York City are just as important as the lessons that can learned in Washington or Philadelphia. This country has taken many steps along the road to democracy and we’ve stumbled a few times along the way. There would have never been the Salem Witch Trials, the Civil War, or the Civil Rights Movement if we hadn’t but we’ve come so far and still have so far to go. I want my children to learn from our past and to look forward to our future.